When it comes to conversations about different minority groups, the AANHPI community is often referred to as the “model minority.” The term model minority alludes to the generalization that AANHPI individuals are polite, rule-abiding, hardworking, well educated, and highly successful. This seemingly positive stereotype disguises many harmful effects; namely, it ignores the diversity of AANHPI cultures and allows for the racism against AANHPI groups to be ignored, among many other things. 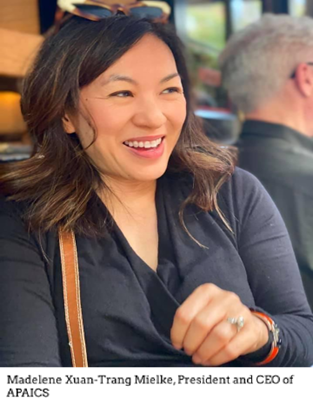 Statistics on AANHPI men and women in executive positions versus White men and women reveal a major disparity between the two. However, when talking specifically about AANHPI women in leadership, this gap grows even wider. This difference can be attributed to the intersectionality between race and gender. This intersectionality brings about a different challenge for AANHPI women in the workplace: the “bamboo ceiling.” Although conversations about the “glass ceiling” are common when referring to the disparity between men and women in leadership positions, conversations about the “bamboo ceiling” are not as prevalent. When compared to their White counterparts, AANHPI women are half as likely to become executives. Even when compared to AANHPI men, AANHPI women remain less likely to be promoted. In other words, AANHPI women face a “double-paned glass ceiling.” The idea that AANHPI women are hardworking and successful, perpetuated by the term model minority, often results in AANHPI women becoming the “forgotten minority.” Leading to their exclusion from conversations about racial bias in the workplace as well as efforts towards inclusion and diversity. Additionally, these perceptions make it difficult for AANHPI women to insert themselves into these conversations. A recent Forbes article details the experience of an AANHPI woman working at an insurance company who describes her situation as lose/lose. She feels if she is assertive and speaks up, she breaks the stereotype of keeping her head down and working hard and would be met with hostile reactions. However, if she maintains the submissive stereotype her thoughts and opinions will be ignored. While this is not an uncommon occurrence for AANHPI women in the workplace, hope for a more equitable future remains due to work environments that welcome and encourage diversity. During a brief interview with Madelene Xuan-Trang Mielke, current President and CEO of the Asian Pacific Institute for Congressional Studies (APAICS), she shared her own perspective and experience by saying, “AANHPI women continue to face traditional gender stereotypes and cultural challenges in the workplace. Although I have not faced this situation in my own experience, I developed leadership skills due to being in a positive work environment where advocates and champions from all communities fully embraced my authentic self, which resulted in me growing into an empathetic leader.” In order for AANHPI women to break through the many barriers they face, we must all work together to embrace the diversity they bring to the table and reject the use of the term model minority. The dichotomy of the term model minority is glaringly evident when discussing the bamboo ceiling faced by AANHPI women in the workforce. It allows the racial bias experienced by AANHPI women to be ignored as well as their continued exclusion from conversations about workplace bias. It perpetuates an illusion of success that prevents opportunities for advancement. This harmful stereotype disguised as a compliment hinders the ability for AANHPI women to sit at the head of the table as representatives for the community. Raising awareness of this representation gap is the first step in narrowing this divide and correcting the popular misconception that the AANHPI community is fairly represented. It is time for everyone, not just AANHPIs, to reject the use of the term model minority and address the harm it has done in order for AANHPI women to break through the bamboo ceiling. About the Author: Olivia Beach is a second-generation Vietnamese American currently residing in Allen, Texas. She is a rising junior at Villanova University majoring in Political Science and minoring in Peace and Justice. After graduation she is looking to attend law school and find a career in public policy