The Importance of AANHPI “Girl Bosses”

The Importance of AANHPI “Girl Bosses”

My name is Olivia Beach. I am a 21-year-old junior in college and when I grow up, I want to be just like my mom. As a second-generation Vietnamese American woman, my appearance favors my American genes leaving me with an almost hidden identity. However, one aspect of my outward appearance cannot be concealed, my gender. Although it often goes unnoticed, my diverse background has everything to do with the woman I am and the one I hope to become. Inside and out, my mother is a proud Asian American woman, or in my own words, a girl boss. She raised my younger sister and me to understand the importance of the more traditional Asian American values of family, hard work, respect, and service. Rather than lecturing us on these values, she demonstrates their importance with her actions. Despite the role this piece of her identity plays, she could never be categorized as a stereotypical Asian American woman or mother. She is not passive nor a “dragon lady,” she values education and hard work but does not let them consume her life, she is strict but does not set the expectation of perfection and believes there is more than one path to success. It is because of my mom that I understand the beauty and value of being both Asian American and a woman.

My mother embodies what it means to be a “girl boss.” I began calling her this in elementary school as I watched her take on her new role as a single mother to two daughters. I may never understand how she did this with such grace but as mysterious as it is, it was not at all unexpected. My mom has always been strong, hardworking, and high-achieving but in recent years she has grown in her confidence as an Asian American woman and leader. I distinctly remember when she went through the APAWLI Fellowship Program because she became more open and honest with my sister and me about what it means to be not only an Asian American woman but a strong, confident, and powerful Asian American woman. It was not until high school that I truly understood the importance of this and why it meant so much to her. 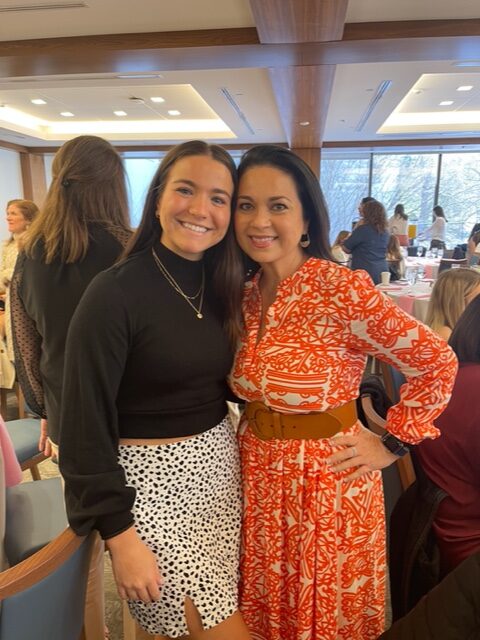 Throughout high school, I participated in debate competitions where the majority of my teammates and opponents were boys. At first, I thought nothing of this but it was naive of me to assume that no one else took into account that I was usually the only girl in the room. This was a rude awakening as I would either be met with an almost insultingly soft handshake or, more often than not, left standing with my hand outstretched as my opponents disregarded my presence and, instead, approached my male debate partner to exchange congratulations and express respect. Of course, I eventually told my mother and she immediately asked how I responded. The answer was simple: I lowered my hand and put on a brave face while my partner did the talking. What my mother said next has quite literally changed my life: “It’s not like girls have cooties or something Liv, you must demand respect.” Although unfair, respect is not always given to women who do not demand it.  So, I took a lesson from my mother’s playbook and challenged the next boy who tried to walk away from my gesture of respect and told him, “It’s okay, girls don’t have cooties you know.” While I still receive some of those handshakes that leave me wanting to have the person try again, I have not had my hand ignored since.

This was the first of many lessons from my mom about gaining respect from others and growing your respect for yourself. She has taught me to speak my mind even when it seems impossible while maintaining the value of respect. She has taught me to work hard but not to let my hard work go unnoticed or consume my life. She has taught me to serve others by treating them as I wish to be treated and not to stand by those who treat others poorly. Most importantly, she has taught me that family is the foundation of character. My mother is a girl boss and without her, I do not know if I would have the tools to become one as well. I believe it is beyond reasonable to say as Asian American women, we face a unique set of challenges due to this intersectionality of race and gender. Although my experiences differ from my mother’s, watching her take on every challenge that comes her way with confidence and poise gives me the confidence to face my own. Everyone needs a role model that inspires this kind of self-certainty whether that be in the home, the community, or in the media. Girl bosses can change the world and visible girl bosses can motivate others to do the same. Many of us have been told that representation matters because quite frankly it does. It is empowering to see people who look and think like you achieve goals you never thought possible. It is inspiring to see my mother, as young me would say, “conquering the world” all while sharing her knowledge and experience with other Asian American women. Change is happening and I do hope that one day we can establish that girls do not have cooties.

About the Author: Olivia Beach is a second-generation Vietnamese American currently residing in Allen, Texas. She is a junior at Villanova University majoring in Political Science and minoring in Peace and Justice. After graduation, she is looking to attend law school and find a career in public policy.